My son Nathan asked me if I wanted this doll the other day. I said, “It’s such a cute thing, do you remember where you got it?” It evoked memories of a gift given it to him when he was 7 years old. Memories of my parents rushed back. Nathan has moved from home to college to seminary to a vicarage assignment and temporarily home again. He needed room for books, so the doll and some other things had to go. We let go of precious “things” from time to time, but, memories of the people we love—who have influenced us—remain in our hearts. This doll reminded me of the compassion and Christian generosity of my parents.

It was an exciting week for Walter and Ruth Busse as they entertained Hanna Witt-Pasztowa from Plock, Poland (a town of about 130,000 population) for four days. Hanna says she found it just as exciting, not only to tour a completely different part of the country and way of life, but also to, finally, meet first hand the people who had so much influence on her life and the life of her family.

The Busses and the Witts became acquainted because of a Lutheran World Relief clothing drive. This particular drive was held after World War II when people in Poland needed so much. Walter, who was about 24 at the time, put his name and address in a pocket. It was fortuitous that the family receiving the clothing was headed by a father who understood the need for knowing a number of languages. Bertram Witt, of Weilun, Poland, knew five languages, one of them being English, and he wrote back to the Busse family to thank them for their gift.

Hanna remembers it thus: “Poland was quite destroyed after the Second World War. Cities were 90 percent destroyed, including Warsaw and my small town. The people of Poland had to have some help. Of course, the first to help were the United States. You know, the United States is quite a strange country. From you all the world expects help. When do you say ‘stop with that, we have our own problems.’ But you do not do that. You continue to help. Thank God you helped my country.

“The protestant church here in the United States gathered clothes and sent it to the protestant church in Poland. My father knew English. English is the language for science and mathematics and culture so he felt it was important to know that language. When he found the note from Mr. Walter Busse in Appleton, he wrote to him to say thanks.

“You know, the first wonder is that Walter Busse was then about 24. My sons are now 25 and 30 and I don’t see that they are interested in helping somebody, although they know there are many people they could help. My father continued to correspond with Walter and the family from 1946 until he died in 1963. They were very nice and warm letters that we received from the Busses so that we knew all about this family. When Walter wanted to marry Ruth, he sent a picture, and asked my father, almost as a brother although my father was much older, for his opinion or blessing.

“The Busses sent us things we really needed or wanted. They sent me a part of my life, really.”

“We didn’t send that much at all,” Walter broke in. “We are overwhelmed that she wanted to come and thank us personally.”

“There were things that we did not even have in Poland, or if we had them we could not buy them. We didn’t have any money. My father was a teacher. My mother stayed at home to raise us three children. So sometimes I would have things, maybe sports equipment or food or even chocolate, and my friends would say ‘where did you possibly get that?’ Other children couldn’t have this help, because no one in their families could speak English. It was quite a wonder really, and certainly an influence on the quality of my life.

“It was important to me that these people who continued to help me throughout the years were protestant since we were a very much smaller group. Most everyone is Catholic.”

Hanna says her church cannot afford a building but rent the use of a Catholic church for their services. “You know, to know these nice people, the Busses, was a motivation for my whole family to learn English and that was a very good thing.”

Hanna is a graduate of a music academy. She is the manager of a small symphony orchestra composed of about 45 people, which means she organizes the concerts, invites soloists and conductors, and is in charge of the program. She is also a piano teacher in the high school of Plock.

She serves in the women’s commission of her Polish Evangelical Lutheran Church and is music commissioner in her church. She also plays organ for the church.

She serves on a committee of 10 people for the government, arranging Esperanto cultural events. Esperanto is an artificial language, which Hanna calls very logical. “Espero means hope,” said Hanna. “it was to be a language to gather people to be tolerant. The doctor who devised it was Jewish. The language is built on the idea that people are better off without wars.”

She served on the city council of her town for four years. “This was the first time we had local government 50 years under Russian dictatorship. I was the chairman of the culture, education and sports commission.”

Hanna came to the United States for the first time two years ago. She was invited by Plock’s sister city of Fort Wayne, Indiana, along with the president of her city and the president of the city council. Hanna was invited because she is chairman of the sister city committee. A part of her job is to prepare for the visits of people from Plock’s sister cities, which includes, in addition Fort Wayne, Darmstadt, in Germany, and Forli, Italy.

Her visit to Appleton at this time was possible because she was again invited to Fort Wayne for a week. Fort Wayne is celebrating a bi-centennial, and the committee purchased her ticket. She enjoyed her visit in Fort Wayne. “I felt like I was right at home, because I made friends on my visit two years ago, and some of them have visited in Poland since then, several have been to Poland twice,” she said. “The only thing is my English is not so good, you know. I read and study English, but this is only the third time I have spoken it. I just studied it by myself. English is not my best language.”

“Actually, she speaks English very well,” said Ruth Busse. That was obvious during the interview. She, like her father, is a linguist, and knows five languages.

Walter and Ruth were a bit surprised to find out how important Hanna and her family thought their gifts were. Walter and his mother began to periodically send more and more clothing and also food items after that first letter from Mr. Witt. They enjoyed the exchange of pictures and cards on the holidays, and most particularly the letters from the family.

Hanna’s husband, Roman, is a medical doctor. Their older son is also a doctor and the younger son is studying theology. “When I first heard that her husband was a doctor,” said Ruth, “I was very happy for her. I thought that finally things were going really well for her, but I now find out that factory workers receive more salary than a doctor in Poland. We were talking about cars one day and she said it was impossible that she could have a car. Her husband does have a car, but an older model and a very small car. They have a telephone now, but in earlier years if he was needed when he was at home someone had to come over to let him know. Hanna walks to work.”

Everywhere Hanna visited in Appleton, she invited people to come to Poland to visit. High on her list of priorities was her wish for cooperation between Poland and the people here. At the Soils Laboratory at Morris, she asked for an exchange of ideas and ventures with her city. At the University of Minnesota Music Department, she asked for an exchange between musical groups here with groups from Plock.

They toured the Pioneer Public TV station, the Appleton Press office, and did some visiting with Floyd Wojtalewicz about his visit to Poland a year ago when he was on an agricultural seminar. She met several other Appletonians of Polish descent while browsing downtown.

She worshiped at Trinity Lutheran on Sunday morning, eagerly joining in singing with the choir and very willingly provided piano selections at the evening fellowship meeting.


As time ran out she was only able to view the new high school and Prairie Correctional Facility at a distance, and had to give up a planned visit to a dairy farm.

“Hanna was very impressed with all the things at our disposal in a town of under 2,000 compared to her city of 130,000,” said Ruth. “It was astonishing to her that we had an airport. I think it surprised her to know we have so many churches and apartment buildings, they have no special living facilities especially for the elderly. It was kind of disappointing to have her see that we have to demolish our buildings here at such an early age. For example, part of the building in which her mother lives is from the 13th century, just one example of how different things like that are in Europe.”

While it was very important to Hanna to come here to thank the Busses, for Walter and Ruth the important thing was to meet her. “The family thanked us in the letters over the years,” said Walter. “No further thanks was necessary. This visit is a real bonus.”

“As we have been a part of this Witt family,” said Walter, “in the visit to Appleton by Hanna, we now too, have been touched in our lives.”

A textile fiber art piece—woven wall hanging—was Hanna’s gift for Mom and Dad when she visited. She also brought many different kinds of gifts to give the rest of our family and our parents’ many grandchildren… wooden flutes, small ceramic bird whistles, sheet music and dolls in traditional costume as pictured above.

In 1995, the year after the Prairie Winds article above was written, Mom and Dad took a trip to Europe, planned specifically to visit the Witt family.


The Gift of Jesus Christ in my parents’ lives and the fruit of the Spirit brought them joy in giving, not only material things, but as they often shared their faith through reading the Word of God at family gatherings.
Posted by Elizabeth Knaus at 2:51 PM 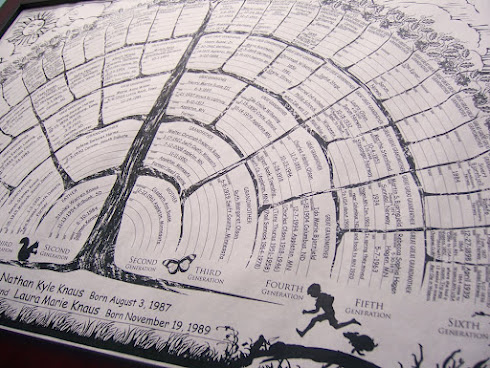 Click photos for more info on buy-one-get-one-free blank family tree charts! Above example begins with children showing ancestry of a brother and sister. 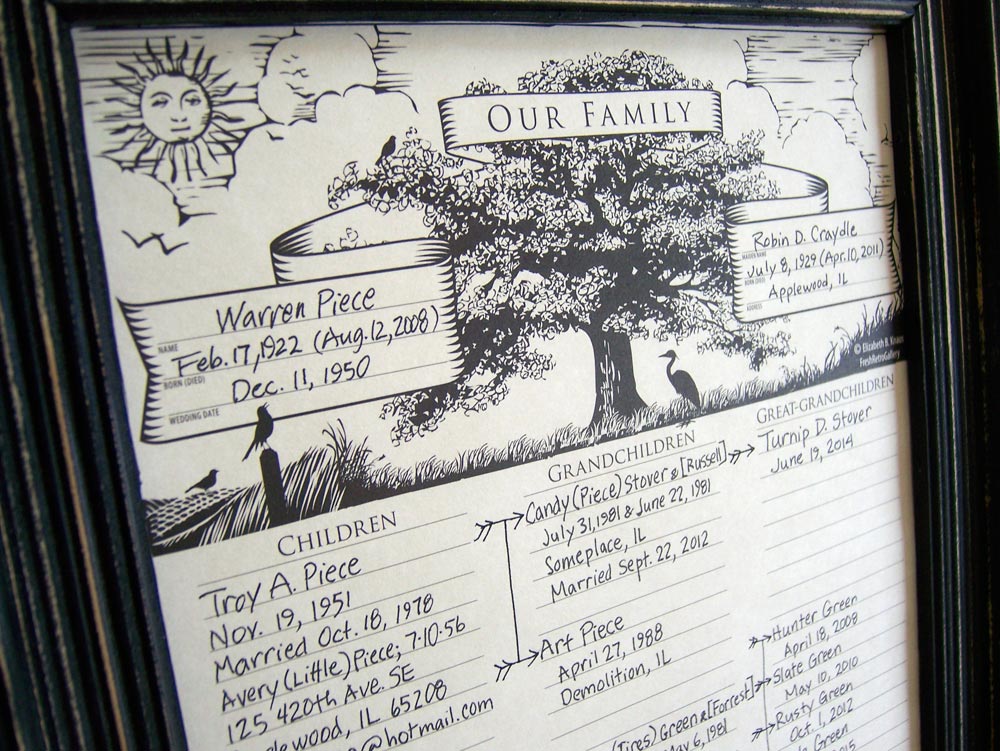 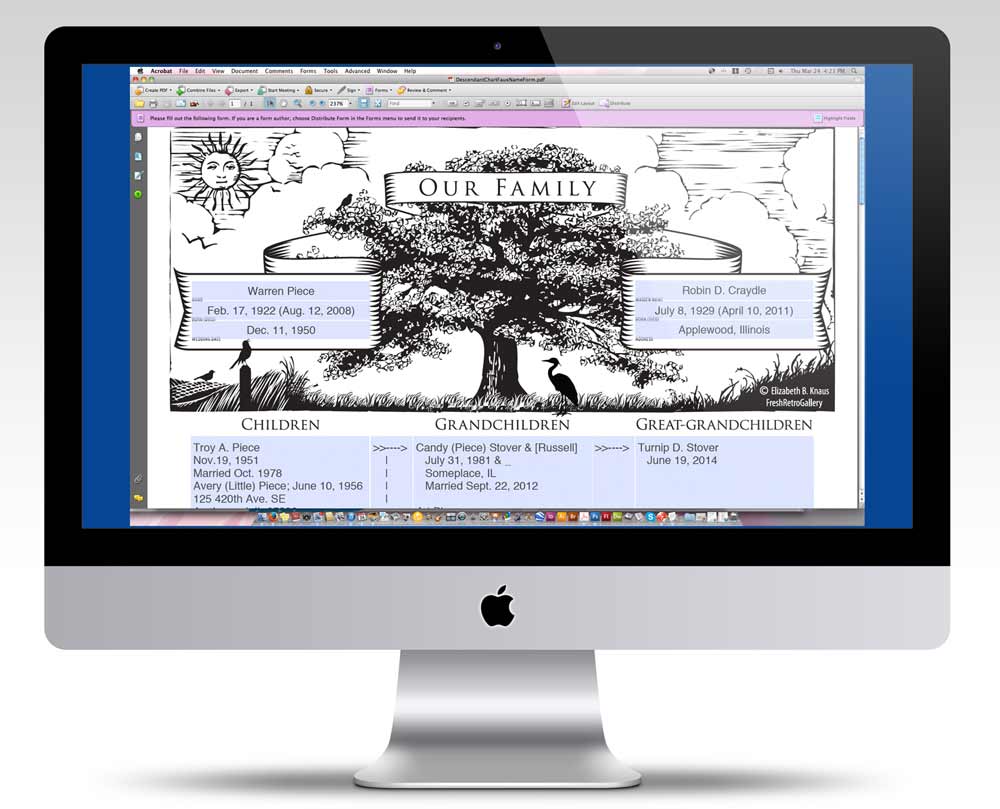 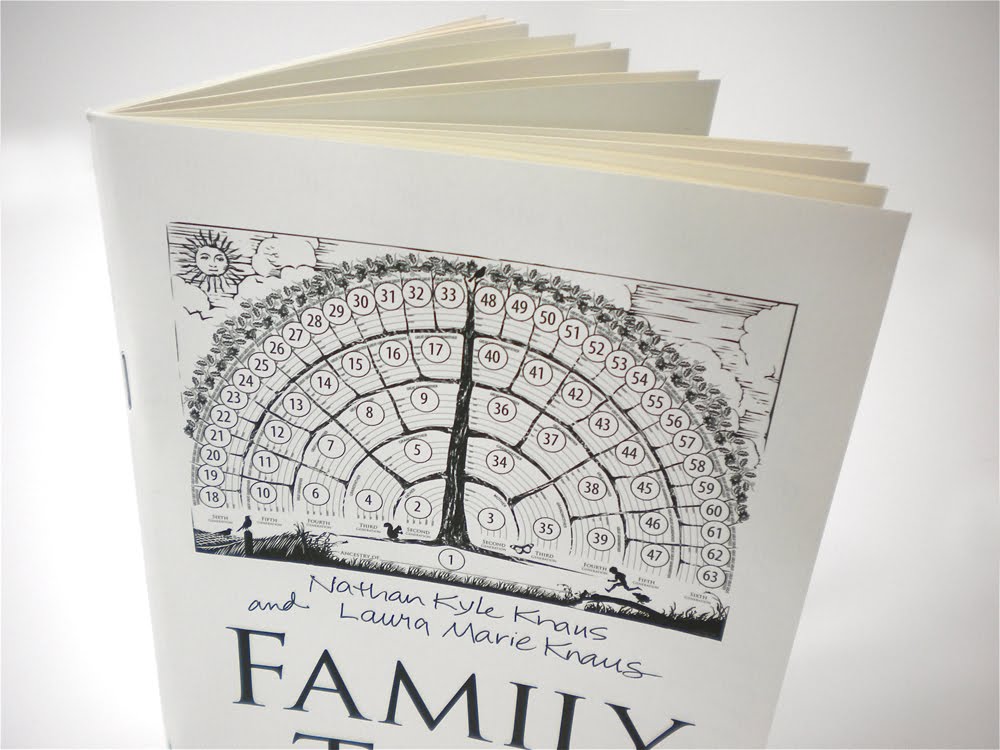 Get 2-per-order! Click the photo above for more info on this easy-to-use printed notebook which allows you to handwrite your personal genealogy data, chart ancestry and memories. Makes wonderful gifts for baby, men, women, children, parents, grandparents and mother/father in-laws. 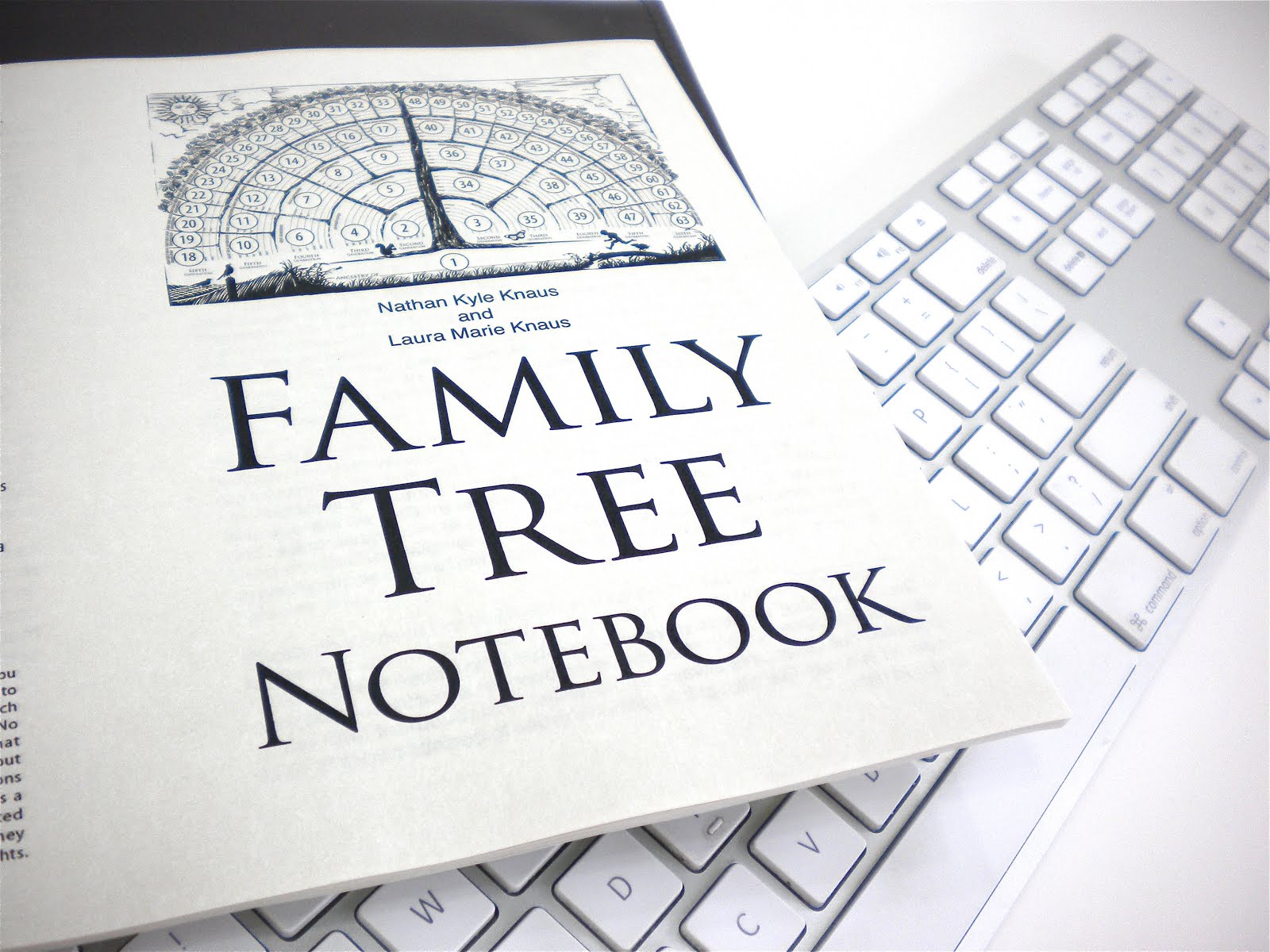 5 Miles Round Trip for Exercise and Quiet inspiration


5 Miles Round Trip for Exercise and Quiet Inspiration —See the entire book preview at Blurb.